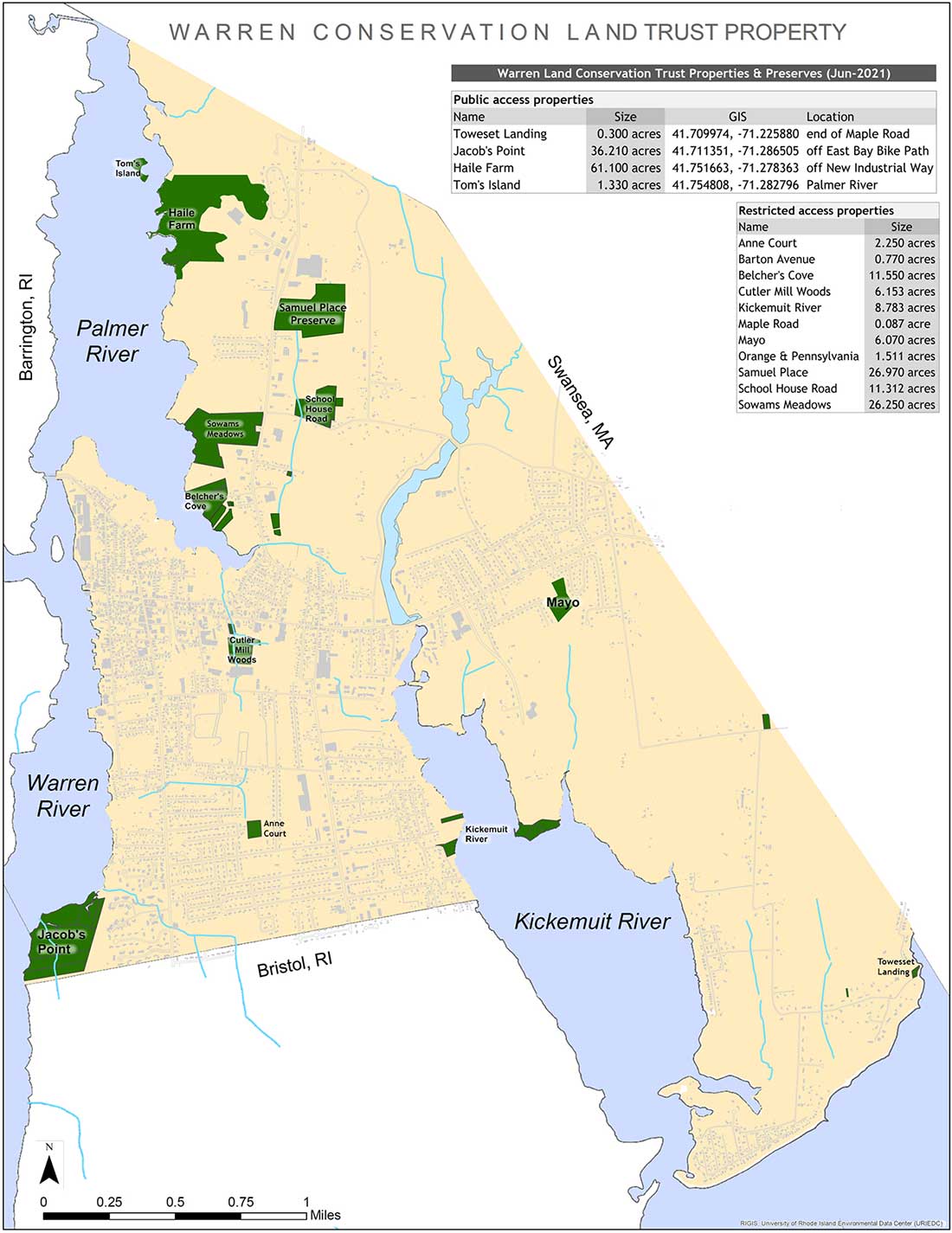 As of January 2021, the Warren Land Conservation Trust holds about 200 acres of land in 11 different areas of town. Most of these properties are environmentally sensitive land – wetlands or marshland. As a result, we often do not allow public access.

Four of our properties are currently open to the public: Jacob’s Point, Haile Farm Preserve, Toweset Landing and Tom’s Island.

To see what flora and fauna have been observed on WLCT properties and to record your own sightings, please visit: iNaturalist Details

Honoring the history of the lands we protect

From the time of the last glacial retreat approximately 12,000 years ago, the lands and waters in Warren and surrounding towns have proven to be a bountiful resource for those making this area their home. The land came to be known as Sowams or ‘south country’. The original Algonquian people came to be known as the Pokanoket which refers to the “place of the cleared land” or “land at the clearing” and as the Wampanoag, “people of the first light”.

In the 17th century the Pauquunaukit (anglicized as Pokanoket) held the leadership of the tribal groups that now make up the modern-day Wampanoag Nation. However, ethnically Pokanoket groups and their neighbors did not begin to refer to themselves as Wampanoag until after King Philip’s War, when Pokanoket identity was suppressed in Rhode Island and Massachusetts through a concerted effort to remove the war’s survivors from the land by selling them into slavery or execution. Thus, while all Pokanoket are Wampanoag (being one tribe among several), not all Wampanoag are by lineage Pokanoket. The Pokanoket are the indigenous group in the first Thanksgiving story, and their leader, Massasoit Ousamequin, signed a treaty with the Plymouth colonists pledging peace and mutual assistance that lasted for just over 50 years, ending with the defeat of the Pokanoket and their allies in King Philip’s War in 1675-1676.

Sowams, an area of East Bay Rhode Island and nearby Massachusetts was the main settlement of the Pokanoket when the Pilgrims arrived. Governor William Bradford of Plymouth had been told that the land of the Pokanoket had “the richest soil, and much open ground fit for English grain, etc.,” giving a hint of the conflicts over land that would soon develop.

The WLCT recognizes the rich traditions of the native people who lived as one with the land. We are honored to be acting as stewards of these historic properties, maintaining them as much as possible in their natural state.