The Warren Land Conservation Trust has acquired 55 acres of a formerly much larger property that was continuously farmed for over 300 years, from 1682 to 1988.  For 170 0f these years the farm was in the possession of the Haile family, descendants of Richard Haile of Swansea (1640-1720).  The land was originally farmed by Obadiah Bowen (1627-1710).  As a Proprietor of Swansea in 1658, Obadiah was listed as number 23 in the order to draw lots for the meadows on the north side of town.  He received, in 1679, a ten-acre house lot and uplands and salt meadow, reaching from the Palmer River inland and across Market Street to the Birch Swamp.  He built a house on the rocky highland.  His son Thomas Bowen later purchased the farm and added to it another 70 acres making a total of 170 acres.  He sold it to Ephraim Pierce in 1708, who sold it to Richard Haile a few months later.  Richard’s wife, Ann Mason, was the granddaughter of Obadiah Bowen.

In the mid-nineteenth century the land became known as the “Judge Haile farm,” in honor of Levi Haile, an 1821 graduate of Brown University.  As a justice of the Supreme Court of Rhode Island, he served on the court that tried Thomas Dorr, the leader of the Dorr Rebellion of 1842,  which was a struggle to extend voting rights in Rhode Island to non-property owners.  Levi Haile made improvements on his house and farmed the land, as did his two sons, Levi Walter and William Bradford Haile.  After the latter’s death in 1884, his minor daughter Belle Bernice Haile sold the farm to Daniel Stoddard.  In 1911 the farm passed to Manuel Nunes, who continued to farm it until 1988.

The line of ownership within the extended Haile family is:

When we study the management of this bit of farmland over a 300 year period we can recognize a pattern of successful adaptive agricultural land use.  From the first generation of English settlement along coastal New England, farmers had realised that stock farming was more profitable than crop farming.  It required less labor, a ready local market existed, and the bay environment of salt-water marshes  and low lying meadows was suitable for raising salt hay for animal fodder.  The salt hay was used within the farm and was also a source of income.  This pastoral husbandry is evident in the 1718 estate livestock inventory of Richard Haile:  80 sheep, 2 oxen, 5 cows, 7 two-year-old cattle, 2 horses.  In the early 20th century Mr. Nunes added chickens to supply meat and eggs.  Former and existing sites on the property evidence the type of mixed farming practiced: a milk house, corn crib, potato storage building, two silos, cow barn, heifer barn, grape arbor and fruit tree orchard.  The 1850 census listed the Haile farm as the third largest in Warren. Levi’s 1854 estate inventory listed:

It is important to recognize that this land has a history pre-dating the English settlers.  It was part of the homeland of the Wampanoag people, who undoubtedly planted it with their three staples of corn, beans and squash, fertilized with fish from the Palmer River.  Only after the devastation created by the 1676 King Philip’s War which originated in Swansea, and the defeat and exile of the Native inhabitants, were the proprietors of Swansea able to move in and divide up the fertile fields and begin to create their profitable farms.

Information about the Haile farm comes from a draft copy of a National Historic Register Application submitted in 1992 to the Warren, Rhode Island Planning Board. Courtesy of Elizabeth S. Warren, Principal Historic Preservation Specialist.

Information about the Haile family comes from: The Haile/Hail/Hale Family.  The Descendants of Richard Haile of Swansea (1640-1729). 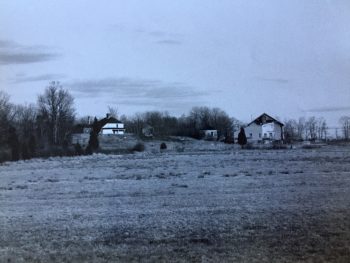 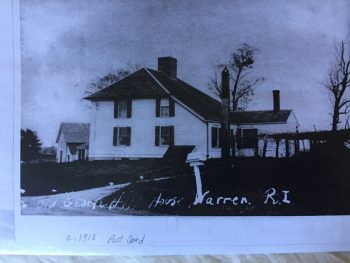