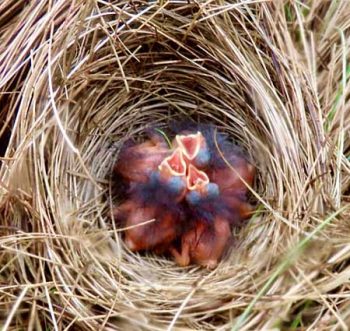 The Saltmarsh Sparrow Research Initiative (SSRI; SALSri.org) is having its most productive year since the initiative began its work at the Jacob’s Point salt marsh in 2017. The team’s efforts are directed by project co-directors Deirdre Robinson and Steve Reinert, with three-year volunteer and the project’s web-master, Jim O’Neill. The project is focused on documenting the impacts of sea-level rise—resulting from anthropogenic global warming trends—on the nesting success of the Saltmarsh Sparrow, a species that nests exclusively in low-lying habitats rendering it at great risk of extinction due to rising seas.

Much of the success of the current year’s work is due to the remarkable efforts of our two 2020 interns, Joel Eckerson and Miranda Zammarelli (see their Bios at SALSri.org/team-page). Joel has an amazing knack for finding sparrow nests, and Miranda is doing yeoman’s work measuring, in two plot-types, the habitat characteristics of each nest-site after the nest is no longer active. Stay tuned to our web site (SALSri.org) to see the articles that Joel and Miranda will be writing this summer as a component of their intern experience. (SSRI appreciates donations that support the stipends of our interns; please see SALSri.org/donate.) 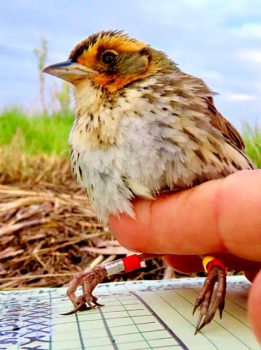 During the years 2017 through 2019 a total of 84 sparrow nests were found; the team has found 42 nests already at the halfway point of the 2020 breeding season! For each nest found, we attempt to capture the incubating female in mist nets, after which we either record the color-band sequence of the female, or, if the bird is un-banded, apply a unique combination of colored bands along with the federally issued aluminum band. The fates of 40 nests have been documented in 2020. Twenty-one of the 40 nests were lost to tidal flooding during the “spring” tides occurring at full- and new-moon cycles. Seven nests were lost to predation, and four others to unknown causes. Through July 4, 2020, 16 young sparrows have fledged from 7 successful nests. Nest success (percent of nests fledging one or more young) thus far this year is 18%, compared to 24%, 26%, and 24% during 2017, 2018, and 2019, respectively—however success tends to be higher in the second half of the season, so stay tuned for final 2020 season results. These and many more such statistics will be calculated and published in scientific journals after the close of our fifth (and potentially final) field season in 2021. Deirdre, Steve, and Jim thank WLCT for the continued access to the Jacob’s Point marsh for this important research.