Earlier this Fall (2019) board member Marcia Goodrum organized and attended a session of drone flying at Jacobs Point with Ben Lescault of Grace Barker Health, a certified drone aviator. The Warren Land Conservation Trust is very grateful to Ben for volunteering his considerable expertise to bring us this unique view. Enjoy the video and then go take a walk there!  Feel free to post comments on Vimeo.

Tips for viewing: Click on the Full Screen icon on the lower right of the video to enlarge it, then click the ESC button on your keyboard to exit when it’s done.

The Warren Land Conservation Trust is pleased to announce that a comprehensive Forest Management Plan for the Haile Farm Preserve has been completed.  Prepared by Max Hence with the support of an EQIP grant from the Natural Resources Conservation Service, this 35-page document details the characteristics of four well defined “Management Units” and identifies current concerns and “desired future conditions” in detail.  It also contains recommendations and “best practices” for each area.  The report is available here: Stewardship Plan

It lays out an ambitious agenda of what is needed to ensure that the Haile Farm Preserve attains a healthy and productive state and is a reflection of the Trust’s commitment to serve as a worthy steward of this beautiful property.  Implementation of the recommendations will need to be done in a phased manner and will require considerable support from the Natural Resources Conservation Service and involvement on the part of our community.

We look forward to moving towards the goal of having Haile Farm Preserve reach its full environmental potential.

Some years ago volunteers from the WLCT put up an osprey platform at  Jacob’s Point. Since its inception it has been extremely successful, attracting a pair of birds, most likely the same pair, year after year. This year the nest “fledged” two chicks. A panel with information on osprey is located on the East Bay Bike Path.  More information is provided below courtesy of the WLCT Board member Finn Brudevold who observes the platform for the Audubon Society of RI.

The osprey is a large hawk having white undersides and a crook in its narrow wings. Adults are dark brown above with brownish-black marks on the wings and brown speckling on the breast. The head is white with a dark brown crown and  brown streak down the cheek. The female is typically larger than the male. At 18 months, osprey achieve their full adult plumage. Juvenile osprey resemble the adults, but have buff-tipped feathers on the back of their upper body, giving them a speckled appearance. As juvenile osprey mature, their eye color changes from brown to yellow.

Osprey feed primarily on live fish, which they catch from the water by using their long, hooked talons. When carrying their prey back to the nest, osprey will arrange the fish so that it is facing upright, head forward, to minimize drag. Occasionally, an osprey will catch and eat a snake, eel, or even a frog.

They make large nests made of mostly sticks and rubbish. Osprey construct their nests atop dead trees, power poles,on man-made nesting platforms, and sometimes on buoys, chimneys, or other structures. WLCT has been involved with building/maintaining half a dozen platforms. One is prominent in the middle of the Jacob’s Point marsh.

Ospreys in the Northeast migrate, staying here in the summers and in Central/South America in the winter. They return the end of March. They then build (or rebuild) nests, mate, and then lay one to four eggs, usually three, in mid-April. The female incubates them for a good month and hatching takes place in late May. They fiercely protect their nest. About fifty days after hatching, young osprey “fledge” (leave the nest), around mid-July. The young remain with their parents for the rest of the summer learning how to fish on their own. And then in mid-September they all head south, one by one.

The adults return (usually to the same nest) in the spring. The young remain at their wintering grounds for two to three years until they return north to make their first attempt at breeding. Less than half survive this initial cycle. It is amazing that five months after being an egg, they fly solo to South America!

Thank you to Butch Lombardi for his photographs below. 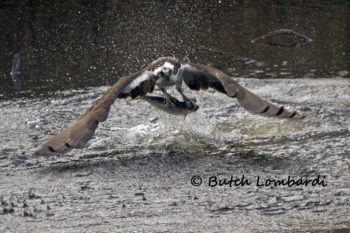 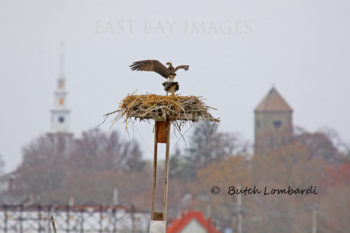 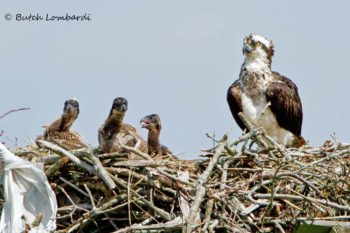 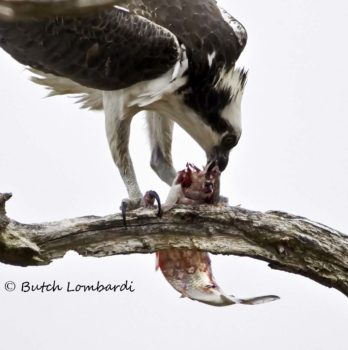 The third season for Purple Martins at Jacob’s Point was most productive – nine pair nested and thirty six chicks were fledged.

Mid April produced few birds but as it warmed many young birds new to the area were calling Warren their home. Late June brought in a banded female bird. We never had a chance to read the band but she will return in the spring.

Steven Reinert of the Saltmarsh Sarrow Research Initiaitive showed a group of us how to band the martin chicks. Monitor Ginger Brown and her group helped with 28 chicks being banded.

In late July a flock of local and migrant birds stopped by, perhaps 80 or so, to check out the site and many of the dead trees in the area were covered with fledglings, many with bands.

The site was looked after by Ginger Brown and her wonderful group from LIFE, Inc. and by John Tracy who is responsible for the attached photos.

The next step will be to lower the gourds and prepare them for winter storage … and the return of the birds next spring!! 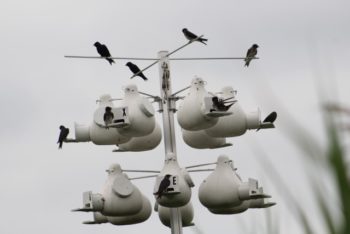 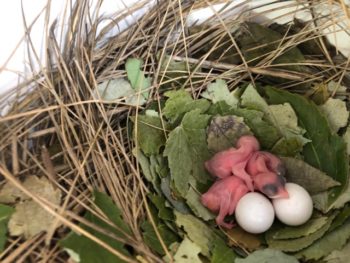 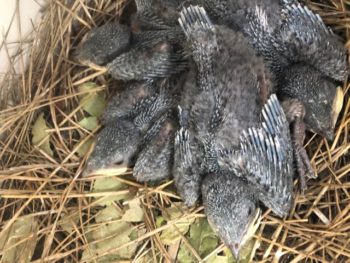 Recently, on an absolutely beautiful Spring day, over 100 nature enthusiasts gathered to mark the official opening of the Haile Farm Preserve. And what better way to to record and memorialize this unique event than a drone video dramatically showing the beauty of the new Preserve! The Warren Land Conservation Trust is very grateful to Ben Lescault of Grace Barker Health in Warren for volunteering his considerable expertise to bring us this unique view of the HFP. Enjoy the video and then go take a walk at the Haile Farm Preserve.

Tips for viewing: Click on the Full Screen icon on the lower right of the video to enlarge it, then click the ESC button on your keyboard to exit when it’s done.

Opening Day for Haile Farm Preserve was celebrated on Saturday May 25th, 2019.  The weather certainly cooperated and the crowd of over 100 attendees was appreciative. Key speakers were Keri Cronin, President of the Warren Town Council, Senator Senator Walter Felag and Ms. Jenny Flanagan representing the WLCT Board of Directors all shown in the first group photo. Several of the Boy Scouts who worked so hard on the project were there to be acknowledged. After the ceremony a large portion of the crowd walked the trails to rave reviews. 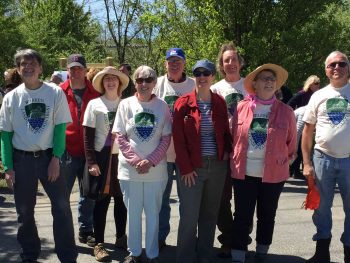 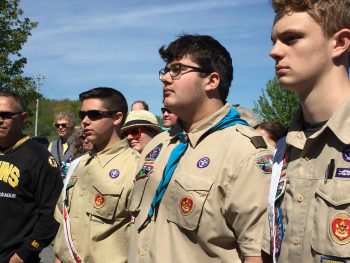 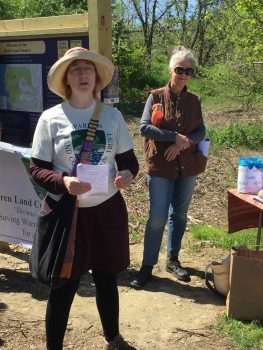 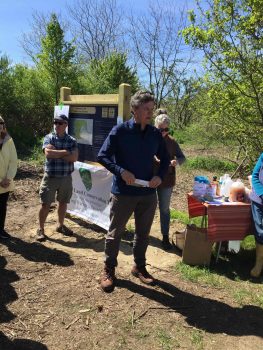 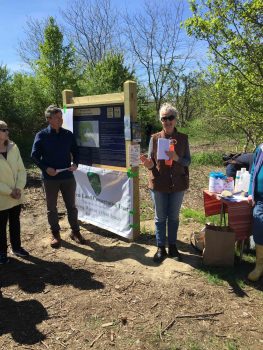 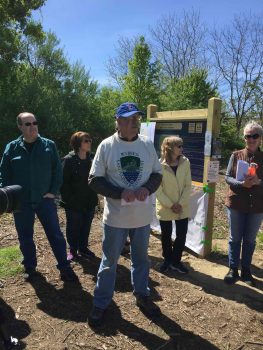 The following is a link to the list of 143 (!) species of birds that have been identified at Jacob’s Point as prepared by the Cornell Lab of Ornithology eBird program:

In addition, here is the eBird link to photos of most of the species that have been reported at JP. Cursor over the photo to identify the bird and the photographer:

Thanks to Deidre Robinson of the Saltmarsh Sparrow Research Initiative for providing this information.

The Saltmarsh Sparrow Research Initiative has provided information on its plans for the next three years of its five year project at Jacob’s Point.  Click on the link below to see it.

Charlie DeLavoi M.Sc. is a recent graduate from the University of Connecticut’s Ecology and Evolutionary Biology Department.  He is interested in the evolution of land plants, namely mosses, liverworts, and hornworts.  Charlie believes in promoting the value of these plants, whether it’s through citizen science projects at The Field Museum of Chicago, working on forensic investigations, using DNA to establishing species relations within the group, or sharing some interesting facts about them while on nature walks.  Charlie lives by the motto “Moss is Boss.”

We’ve been working on the trails at the new Haile Farm property, and have been struck by the beauty of the views across the salt marshes along the Palmer River. We were talking this weekend about how the history of these beautiful marshes includes their use as sources for the cutting of salt marsh hay. The1888 book Our Week Afloat by Wallace P. Stanley is the story of two young boys exploring the Palmer River by boat, and it includes this illustration by Henry N. Cady that shows salt marsh hay being loaded on a scow at the edge of the marsh for delivery downriver. 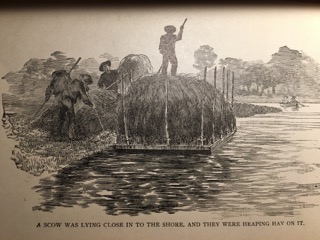 Here is a link to an interesting description of how salt marsh hay was harvested, stored and hauled in Ipswich, Mass which gives a good feel for what took place at Haile Farm and the other farms along the Palmer, Barrington and Warren Rivers.
https://historicipswich.org/2014/02/26/salt-marsh-hay/</a