Early in the fall of 2018 the WLCT received an e-mail from a member of the Brown University faculty entitled “Request permission to collect botanical specimens.” After some discussion, permission was granted. See the following summary. The WLCT is pleased that our properties can be made available to such worthwhile efforts. “On September 21, 2018, fourteen Brown University undergraduates enrolled in “The Flora of Rhode Island” class visited the Jacob’s Point salt marsh and beach in Warren. The purpose of the visit was to collect plant species for accession into the Brown University Herbarium. Students worked in pairs to document and learn the common plants found at the site. Overall, they collected around 20 species and their specimens will be accessioned into the herbarium as a permanent record of a slice of plant diversity at Jacob’s Point. During the semester, the class also visited five other natural areas around the state to collect and learn to identify common plants. The collections are part of a larger effort to document 21st century plant diversity in Rhode Island. The new specimens provide an important comparison to the large number of collections already in the herbarium from the late 19th and early 20th century.”

At its Annual Meeting on November 9th, 2018, the Warren Land Conservation Trust presented its 2018 Distinguished Service Award to Wenley Ferguson, Director of Habitat Restoration for Save the Bay.

Wenley is almost synonymous with vital projects to restore and protect marsh environments throughout Rhode Island. In conjunction with the Warren Land Conservation Trust, she led a large-scale effort to restore the organization’s primary property, Jacob’s Point, beginning in the late ‘90s and continuing through 2017. Currently she is assisting the organization with its efforts at the recently acquired Haile Farm Preserve. She is an expert in “marsh migration” and is a strong advocate for preserving property along the Palmer River. She is currently assisting us in identifying further properties for conservation and marsh habitat protection.

The WLCT expresses its sincere gratitude to Wenley for all she has done and continues to do for the WLCT and the state. 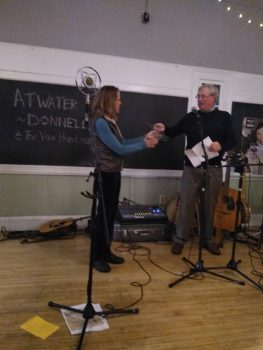 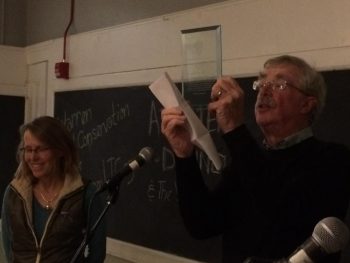 Our benefit concert featuring the highly-praised duo Atwater~Donnelly and The Vox Hunters was a rousing success!! After a preliminary cocktail period, these remarkable musicians played and danced for over an hour to an appreciative audience of well over 100. The emphasis was on songs relating to RI, and even Warren, making the event especially meaningful to the Warren Land Conservation Trust. Many thanks to everyone who worked to make this event a success.

Shortly after the concert, Mike Gerhardt called an expedited Annual Meeting of the WLCT to order. Some business items, such as the election of board members and officers, plus a brief report on the financial status of the organization were handled promptly (approximately the same as last year – financial statements are available on request). Proposed changes updating the original by-laws were approved by the members. After receiving the 2018 Distinguished Service Award, Wenley Ferguson of Save the Bay spoke about the significant progress that has been made in protecting and restoring open spaces in Warren (see separate post).

Finally, Mike Gerhardt gave a short report highlighting the more than doubling of protected land that has occurred in the past year. He highlighted the ongoing work to open up the recently acquired Haile Farm Preserve to the public. And he urged all in attendance who had not already done so to JOIN the WLCT, and then adjourned the meeting, in record time to further socializing.  See photos to the right in the News and Events column. 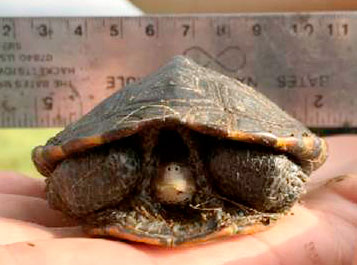 One of the volunteers for the Saltmarsh Sparrow Project operating at Jacob’s Point found this Diamondback Terrapin in the Jacob’s Point marsh about 200 feet to the west of the osprey platform. Nockum Hill in the Barrington River estuary in Barrington is the nesting site for a population of several hundred terrapin, and it is not a stretch to think that this young turtle hatched from a nest there and migrated to our property.  The information was passed along to BLCT people involved at Nockum Hill. Next to be investigated, is the possibility of a new nesting location in Warren.